Faculty and Staff — Business and Management 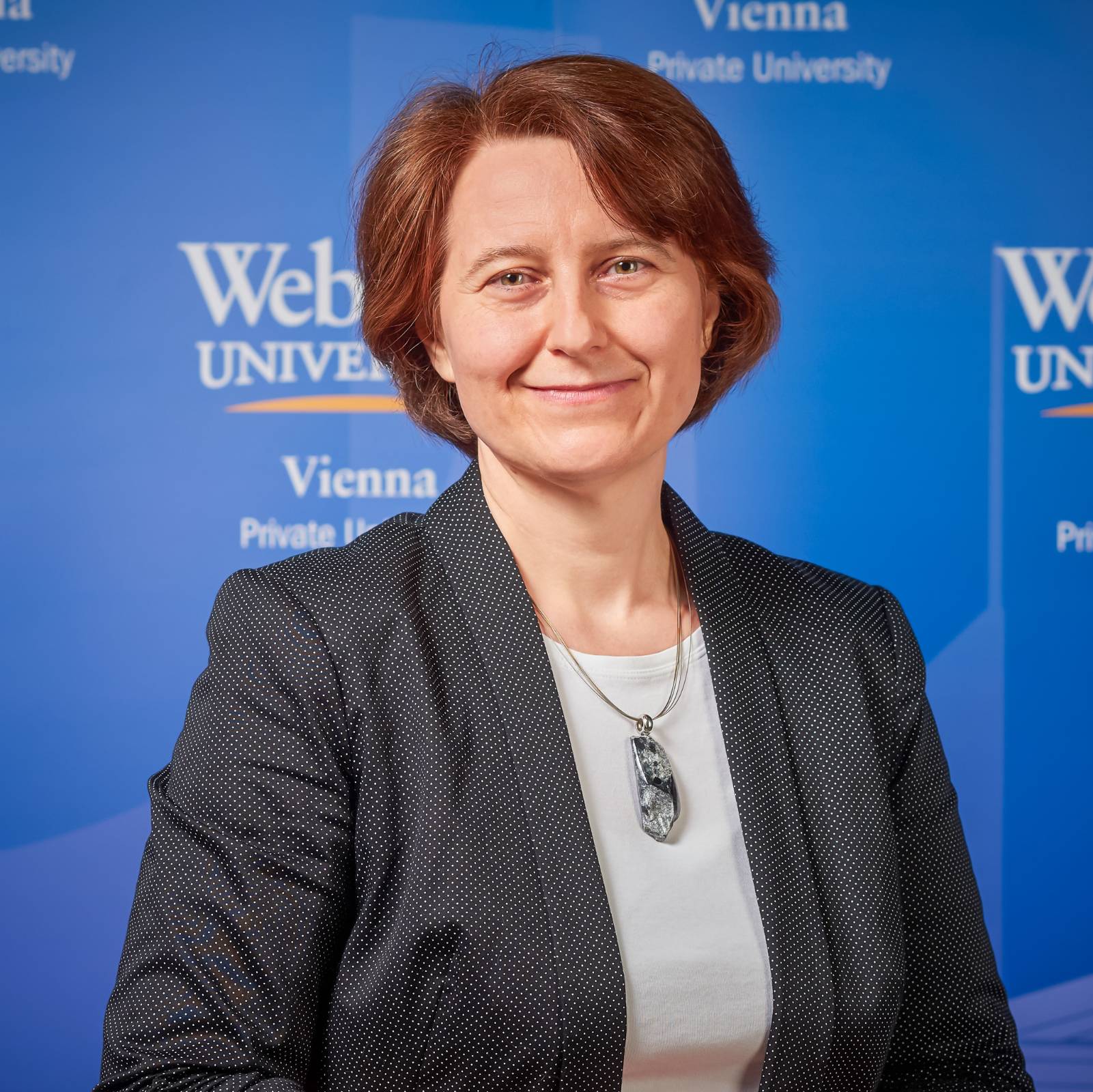 Head of Department and Full Professor; Area Coordinator for Marketing

Dr. Maria Madlberger is a Full Professor at Webster Vienna Private University. Since 2012 she is also a Guest Professor at the Karl-Franzens University Graz. Her research interests are related to the linkages between marketing, supply chain management, and information systems.

Maria authored more than 70 publications in academic journals, conference proceedings, book chapters, and books. Besides that she presents her research at renowned practitioner congresses. She collaborates with firms and institutions in various industries, among them GS1, Metro C&C, ECR Austria, Spar, Rewe, etc. Maria is an Associate Editor of the Electronic Commerce Research Journal and a reviewer of numerous scholarly journals including Marketing Science, European Journal of Information Systems (EJIS), Electronic Markets etc.

Prior to her position at Webster Vienna, Maria was affiliated with the Vienna University of Economics and Business (WU) at the Institute for Management Information Systems as well as the Institute for Retailing and Marketing. In 2009 she finished her Habilitation (Venia Docendi) for business administration entitled "The Interorganizational Information Flow. Interorganizational Systems and Collaboration in the Supply Chain". 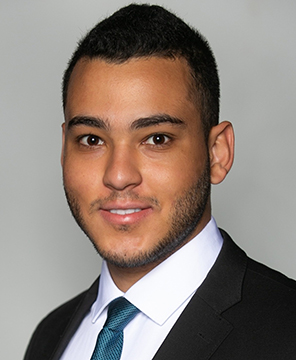 Karim Elatraby first joined Webster Vienna in 2017 as an undergraduate majoring in Business Administration and with a minor in the German Language. In 2019, he was granted a scholarship to pursue his post-graduate studies at Webster Vienna Private University in Finance. He graduated with the highest academic honors in May 2021 and was the valedictorian for 2020 and 2021. His master’s thesis studied the influence of COVID-19 on global financial and energy markets, which led to him being awarded the prestigious Schön Nobel award for Excellence in Research 2021.

Karim has over two years of experience in academic research. His affiliation with Webster Vienna Private University, Karim additionally gained valuable experience throughout his time working as a Trading Associate at the WU Trading and Investment Society. His work focused on the implementation, backtesting, and optimization of algorithmic trading strategies. 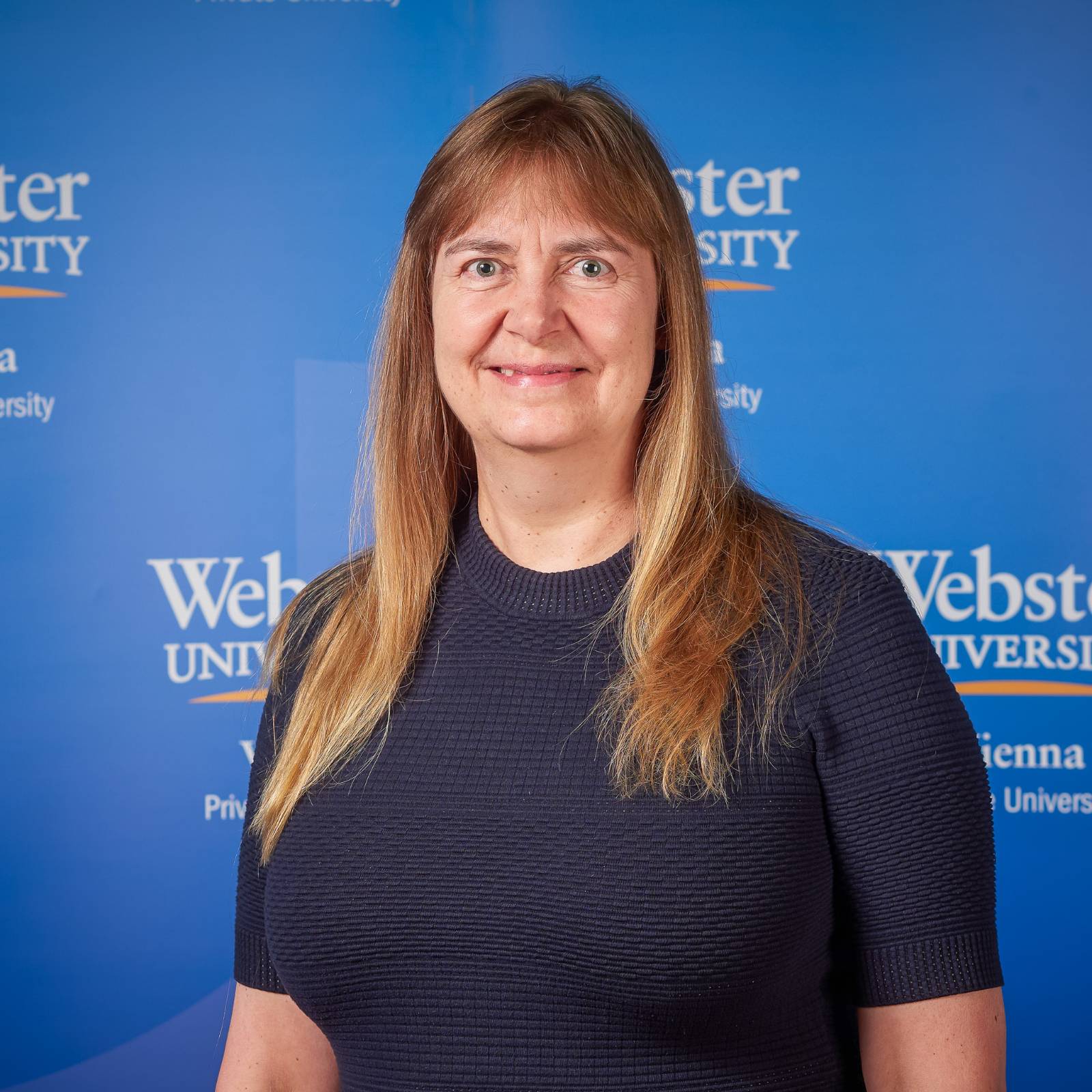 Full Professor and Area Coordinator for Management and Organizational Behavior

Dr. Pernille Eskerod is full professor and senior researcher within management and organizational behavior at the Department of Business and Management, Webster Vienna Private University, since 2015. Further, she is a faculty member at the WU Executive Academy in Vienna, since 2008, teaching stakeholder engagement and supervising MBA theses. In 2016-17, she spent three months at Webster Thailand in Bangkok.

Applying a stakeholder perspective on managerial issues is her core research focus. Currently, she is working on research projects that are partly funded by the Austrian Federal Ministry of Education, Science and Research (Stakeholder Engagement in Rural Tourism) and by the global association Project Management Institute (Harnessing Social Capital with Community Stakeholders in Infrastructure Projects).

Further, she is conducting research on green certificates/sustainability efforts within the hotel industry; sustainability and project stakeholder management; and managerial implications of Internet-of-Things (IoT).

Eskerod has undertaken more international research projects. In 2005-2007, she was Denmark’s national lead on the international research project (PMValue), which was the biggest research initiative ever carried out by the global association Project Management Institute. In 2012-2015, she was principal co-lead together with associate professor Dr. Martina Huemann, WU Wien, of the international research project Rethinking Project Stakeholder Management which is partly funded by Project Management Institute. During her 20+ years in academia, Eskerod has been teaching at all levels — bachelor, master and doctoral — and in executive education. Further, she has done plenty of thesis supervisions. To engage students in learning processes and to disseminate her research-based knowledge stay close to her heart.

Eskerod has attracted research funding from competitive applications submitted to international funds, incl. EU Regional fond and the global but US-based organization Project Management Institute. Further, she has attracted governmental research funding in Denmark and Austria as well as from industrial associations in Denmark. In addition, she has attracted research funding from case study partners, i.e. private and public companies. Eskerod has often acted as speaker, organizer, discussant and reviewer at international conferences, e.g. Academy of Management, Decision Sciences Institute, European Group of Organizational Studies (EGOS), European Academy of Management, Nordic Academy of Management, International Research Network on Project Organizing and Project Management Institute. More of her conference papers have been selected for special issues. During her academic career, Eskerod has paid great attention to knowledge exchange between the academic community and the business community, and most of her research is based on empirical studies, mainly case studies.

Eskerod has a broad professional network. She has served on several assessment committees internally and externally. In 2019, she was ERASMUS+ visiting faculty member at University of Las Palmas de Gran Canaria (invited by Prof. Dr. Jesús Arteaga). In 2016-17, she spent three months at Webster's campus in Bangkok. In 2013-2014, she was visiting professor at WU Vienna University of Economics and Business (invited by Dr. Martina Huemann). In 2013 and 2014, she visited Drexel University, Philadelphia (invited by Dr. Frank Anbari). In 2010, she was visiting professor at Stevens Institute of Technology in the USA (invited by Dr. Thomas Lechler). In 1997, she was a visiting scholar at Umeå School of Business and Economics, Umeå University, Sweden (invited by Prof. Dr. Rolf Lundin). Before joining Webster Vienna, Eskerod had various positions at University of Southern Denmark. In 2008-2014 she was full professor with special duties within project management. Prior she was appointed as assistant professor (1995-1998) and associate professor (1998-2008). 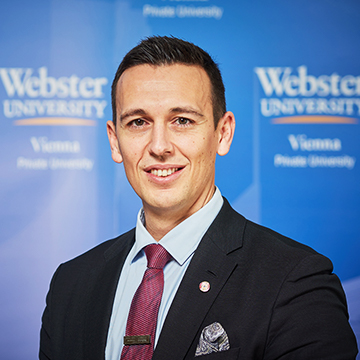 Associate Professor and Area Coordinator for Economics and Finance

His research has received a lot of attention from internationally renowned media, such as The Guardian, Forbes Magazine, New York Post, CNBC, Newsweek Magazine, Russia Today, Daily Express, ORF Science, Die Presse, derStandard and the Irish Times. Antonakakis has received several awards such as, the Neil Rackham Best Research Dissemination Award (from the University of Portsmouth), seven times the Top-Journal-Article-Award (from WU), the Research Excellence Framework (REF) Award from the UK higher Education and the Outstanding Reviewer Award (from the Energy Economics journal). Antonakakis has been a scientific advisor and co-investigator in several OeNB projects totalling 300,000 euros. He has been invited to various international conferences: i) as a ‘private expert’ at the 6th Eurostat Colloquium on “Modern Tools for Business Cycle Analysis: The Lessons from Global Economic Crisis”, ii) participated in a round table (panel discussion) as the main discussant about the “Future of the Euro” at the University of Linz, iii) in a panel discussion as main discussant about “Griechenland Ende oder Wende? (Greece - End or Turn?)” at WU, and iv) has been invited as a ‘young econometrician’ at the SIRE Econometrics Workshop on “Advanced Econometric Modelling for Finance” along with illustrious econometricians such as Hasem Pesaran, Paolo Zafaroni, Valentina Corradi and Rod McCrorie. He is also a regular reviewer in various international academic and respected peer-reviewed journals. Antonakakis is also an associate editor of Journal of Economic and Financial Modelling, Editorial Board Member of Journal of Empirical Economics, Tourism and Travelling and Editorial & Review Board Member of Marmara Journal of European Studies.

His research has generated strong interest in highly renowned media:

He has been a Co-Investigator in the following projects:

And scientific advisor in:

Antonakakis has been invited to various international conferences: i) as a ‘private expert’ at the 6th Eurostat Colloquium on “Modern Tools for Business Cycle Analysis: The Lessons from Global Economic Crisis”, ii) participated in a round table (panel discussion) as the main discussant about the “Future of the Euro” at the University of Linz, iii) in a panel discussion as main discussant about “Griechenland Ende oder Wende? (Greece - End or Turn?)”, at Vienna University of Economics and Business, and iv) has been invited as a ‘young econometrician’ at the SIRE Econometrics Workshop on Advanced Econometric Modelling for Finance along with illustrious econometricians such as Hasem Pesaran, Paolo Zafaroni, Valentina Corradi and Rod McCrorie.

Antonakakis has been awarded seven times the “Top-Journal-Article Award” by the Vienna University of Economics and Business since 2012 and is included in the 2014 Research Excellence Framework (REF). In 2014, He was awarded the ‘Neil Rackham Best Research Dissemination Award’ by the University of Portsmouth, Portsmouth Business School for his publication in Social Science & Medicine journal. 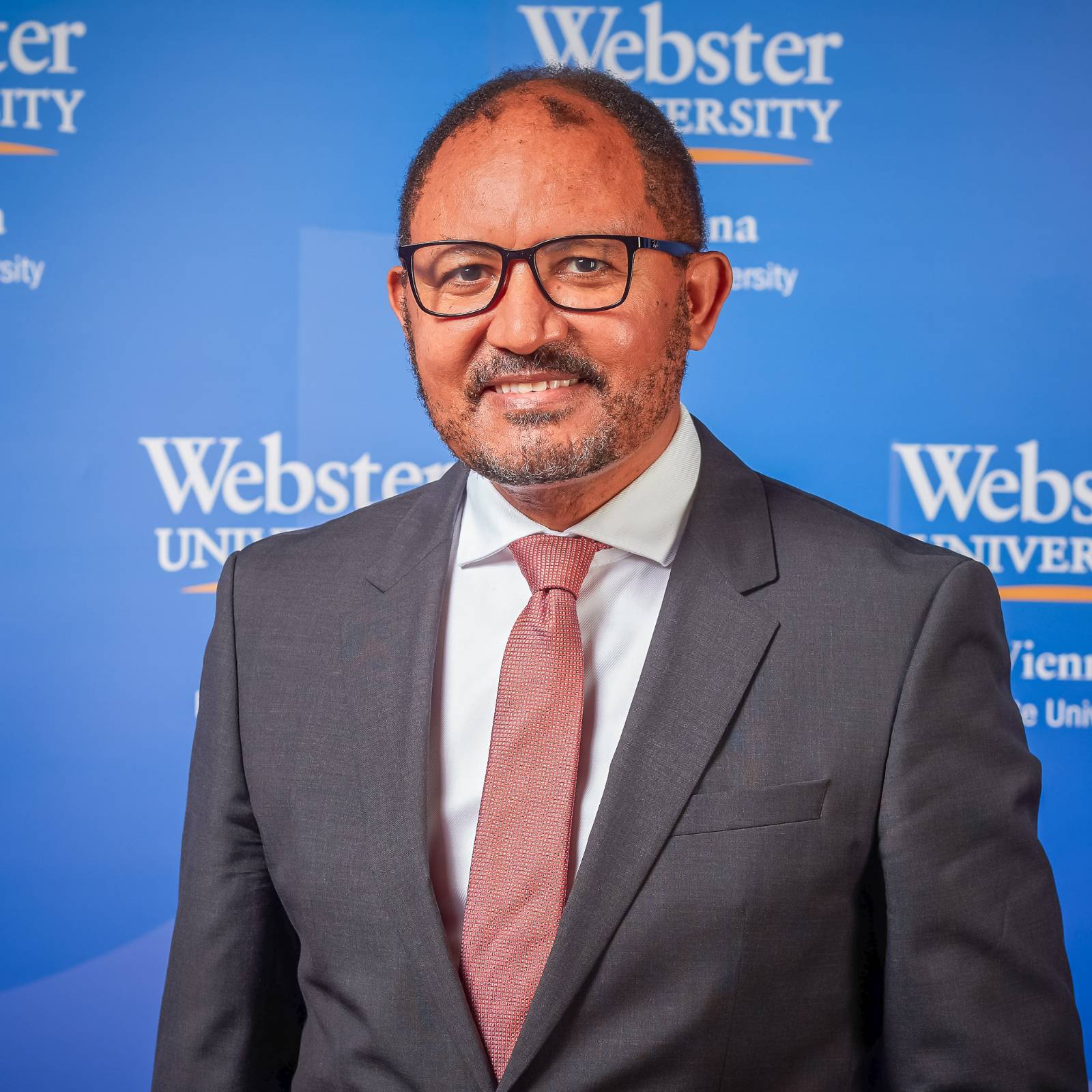 Workie holds a PhD in Development Economics from the University of Munich in Germany and a PhD in Finance from the University of Economics in Slovakia, where he served as teaching assistant to Prof. Stephan Klasen. He graduated from the joint graduate program of Pittsburgh University and Vienna University of Technology in advanced studies in Professional Programs in Applied Economic and Finances. Following his inaugural public lectures (external imbalances and economic growth) in 2012, and approved both by the University’s Board and the Ministry of Education, Workie was inaugurated as a “Professor of Economics” by President of the Slovak Republic in 2014.

Having studied both finance and economics, Workie has been engaged in research and endeavors to explore wide range of research topics focusing on the “finance of economics and the “economics of finance.” He has acted as principal investigator of nine projects and a co-investigator of two projects, most of which revolve around exploring business cycle phenomenon, the dynamics of income disparity, external imbalances, debt-growth nexus, capital flight and the labor market.

Editorial Board and Reviewer Membership 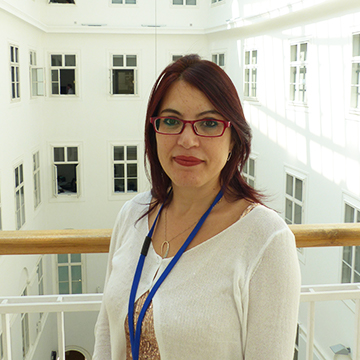 Dr. Maria Teresa Punzi is assistant professor of Economics at the Department of Business and Management, Webster Vienna Private University, since 2018. She had previously held a position of assistant professor of Economics at the Vienna University of Economics and Business (WU Wien), at the University of Nottingham Malaysia and at the University of Alicante. She holds a PhD in Economics and an MA in Economics from the Boston College (US). She is an interdisciplinary researcher with a focus, among others, on international macroeconomics and international finance, monetary policy, macroprudential policy, environmental policy and applied macroeconometrics. Punzi was listed among the top 25% Institutions and Economists in Austria, as of February 2021.

Other Articles and Publications

Editorial Board and Reviewer Membership 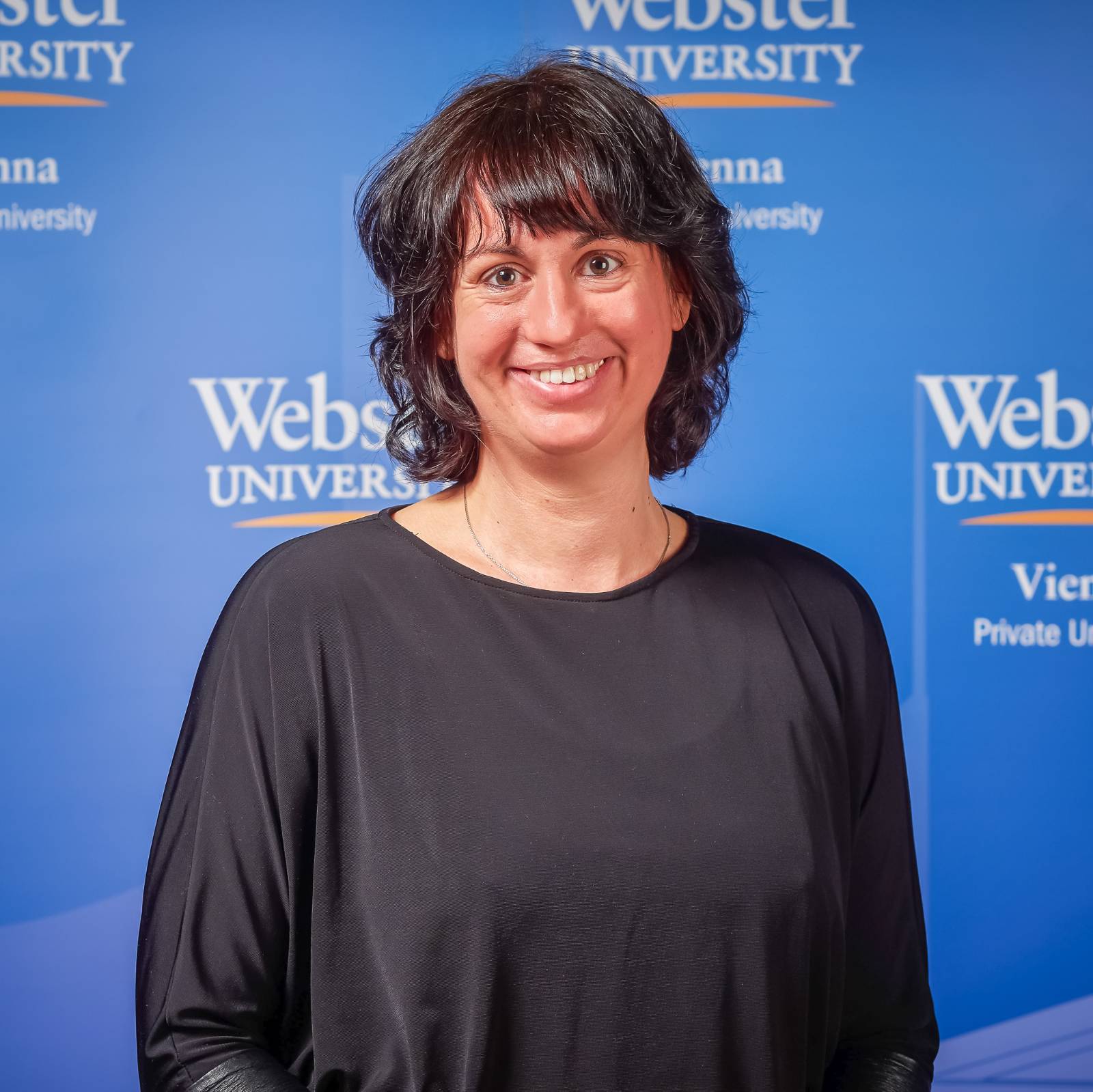 Dr. Eva Zedlacher is assistant professor of Management at the Department of Business and Management. She joined Webster Vienna Private University in 2019. Before joining Webster she worked as pre- and post-doc researcher at Vienna University of Technology and in the field of organizational development at two large Austrian-based organizations.

Zedlacher’s core research focus lies in the organizational analysis of organizational (mis)behavior. In her PhD thesis, she investigated the prevalence and normalization of workplace bullying in highly gendered organizational/professional cultures (military, academia, etc.). In her current research, she is interested in how organizational third parties make sense of bullying allegations and how organizations can best intervene at an early stage of the bullying process. Moreover, she is also participating in a cross-cultural project on rural tourism and stakeholder engagement in Serbia and Austria. 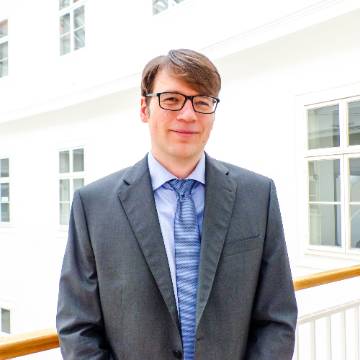 Dr. Martin Altenburger is an Assistant Professor of Accounting at the Department of Business and Management. He joined Webster Vienna Private University in 2022. Before he joined WVPU, he worked as a pre- and post-doc researcher at the Vienna University of Economics & Business (WU) and the University of Vienna, respectively. Altenburger mainly focuses on experimental and behavioral research in accounting. His research incorporates theory from economics, psychology, and other social sciences to provide insights into accounting issues. In particular, he studies how social norms, mood and historical information influence internal reporting honesty. He also investigates the effects of corporate giving and different contract frames on employees’ performance and their performance overstatement.

Other work examines the impact of horizontal monitoring on tax compliance and tax planning, the effects of the design of targets and tasks on employee motivation, the interplay between diversity and incentives on team performance, and the intentions regarding whistleblowing accounting fraud. He also studies the sustainability reporting in the Austrian Traded Index (ATX) by analyzing archival data.

Mar 1, 2023: The Neuroscience of Love: lecture and reception at Webster Vienna Private University